The boisterous and bonkers Beppu called me back again and, like a sailor drawn by my siren`s watery call, I obliged. My first trip to the onsen city left me a little bit breathless, very much inspired and desperately searching for the right adjective; eventually arriving at `saturated` due to its applied polysemy. My second trip leaves me even more set in my romantic views, I guess it`s a long term love affair, but something tells me Beppu isn`t the type for commitment.

Due to bad weather, or lack of time, there were quiet a few places I missed out in my last trip including the famous monkey park, the rope-way and the not-so-famous Kifune Castle.

The castle was built in 1957 to remodel its original 830 year old structure. We saw the castle looking down at us during our must-do trip to the Hells, so we decided to explore. Being visible from most places in Beppu means that it’s easy to find, even if (or when) Google Maps fails you.

We went from the Yukemuri Observatory, which is about a 3 minute drive from the castle, hoping for a better view as the observatory is currently under maintenance. The castle offers free parking, not so special in Japan, but I know UK readers will be surprised to hear it.

It costs 300 yen for adults to enter, which is about 2 quid something or 3-ish dollars (I guess there’s a reason I teach English and not Maths). 300 or 3000, it`s worth it for the amazing view, from the mountains all the way down to the coast and out to Oita city. We got a better view of Kannawa`s yukemuri, the famous plumes of onsen steam that we couldn’t really see at the observatory.

So far, everything was pretty standard, a beautiful bright Japanese day at a gorgeous castle looking out at an amazing view, but then…

A tour guide beckoned us over to a hefty fishtank sitting outside of the castle. At first I thought there was a giant blob of mochi in the tank, but I was wrong. It was, much to my surprise, a giant, 70-years-dead, white snake. The guide explained to me, Stephen and a guy from Taiwan that the white snake in Japan is a good sign, that it is believed to bring wealth and that the snake was an Indian Python.

We then followed him into the castle and, after taking our shoes off, got to have a look around.

Our wanderings didn`t last long before we were beckoned over to an ominous, translucent glass door. Could this be Narnia, thought I, or perhaps a rabbit hole? Again, my guess was wrong, but a little closer than the mochi one.

The door instead opened to reveal a dog bed, which was pulled out to show a blue net which held inside a live, white snake.

Now, I have to admit that this isn`t something I see very often which, I know, is hard to believe. I didn`t have long to ponder, before I was told to sit down, clap twice and close my eyes. The guide told me that the snake was quiet; ‘most likely due to being held in a blue net in a dog bed’, I mind-replied.

Next came a chant. My Japanese is survival level max so I have no idea what was being said, but afterwards I was told to put both hands on the snake. Realising that it was just going to be a bizarre day, I complied, slowly placing my hands on the snake and closing my eyes. It is at this point the tour guide shouting `ka!` in my face and I jumped out of my skin.

Needless to say, the beast was stunned. Me being the beast.

Once my blood pressure returned to normal we continued wandering around the castle and looking at the images and artwork they had displayed. There were 3 floors, with some pretty steep steps connected them and on the top floor was a small shrine set on tatami, with a full 360 degree view. 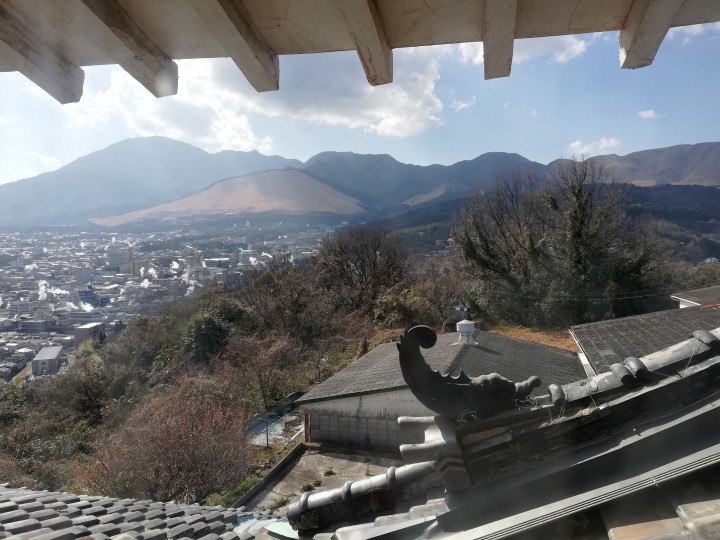 I would recommend Kifune Castle to anyone visiting Beppu, except maybe pregnant women or people with weaker hearts. It may not be the serene, spiritual experience you`d expect, but in place of reverence you get a hint of madness and on a more serious note, the views and artefacts inside the castle are well worth the risk of a bite. The only let down for me was wandering about the quality of life for that poor little snake.

For more info about the castle or other Beppu-based activities, have a look at the Navi website; it’s in English! 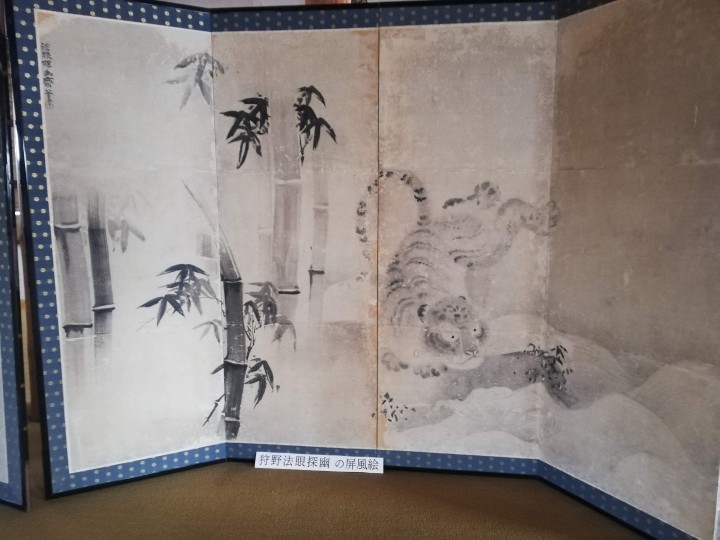