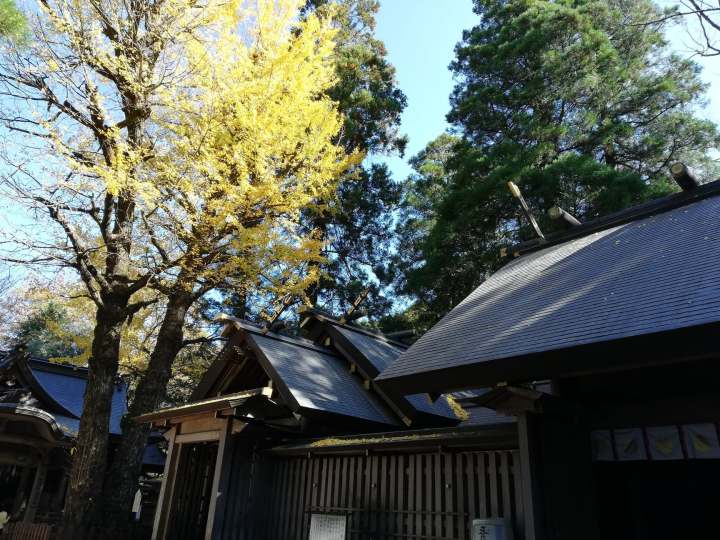 After rowing and casually strolling around Takachiho Gorge I was on the road again; heading for Amano Iwato Shrine, as seen in a pamphlet I’d been given at my B&B.

The drive was beautiful; the skies were clear and the sun was shining as I followed the road around the mountain with the green valley on my side.

When I got there, I walked through a huge Tori gate, washed my hands and saw the shrine enclosed away from the main path.

The little hideaway, being cut off from the main path, was quieter and I immediately felt calm. This feeling was furthered by the constantly falling yellow leaves of the giant tree sitting quietly proud. I stayed here for a while, just taking it all in.

When I eventually decided to go, I saw a sign on my way out and, being unable to read kanji, decided to follow it blindly.

The walk took me from the shrine’s gravel path onto the public street where there were street vendors and cafes. The cafes were selling ice-cream and offering lookouts onto the river well below.

One of the street vendors was well advertised by a cat sat nearby, meowing at the owner, who had obviously given into its previous demands for food.

I stayed here for a bit too, just chuckling at the non-verbal conversation going on between the vendor and the cat.

After the cat was shooed to a distance of 5 metres from the stall I headed off, where the directions led me down into the trees, over a bridge and by the river.

Here I came across Amanoyasu Kawara!

I turned the corner of a narrow path and was pretty stunned by this cave. It sat right on the river bank and was COVERED in little pebble piles.

I decided to research this place after my visit, after getting only small bits of information while I was there. 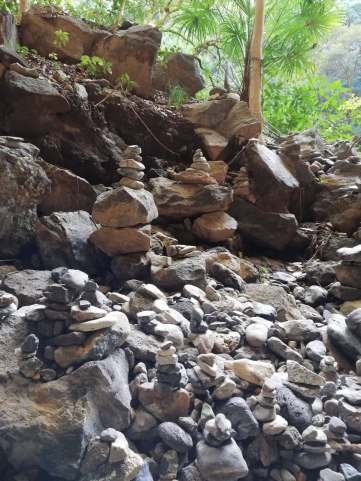 I found that this spot was the place that the Goddess Amaterasu was believed to have fled to, in anger of her brother’s violence. This led to the world being plunged into darkness and caused the Gods to gather at this spot to try and draw her back out.

Despite the well-known beauty of Takachiho Gorge, I feel like Amanoyasu Kawara is deserving of attention in it’s own aesthetic and spiritual right.

All photos taken by me!