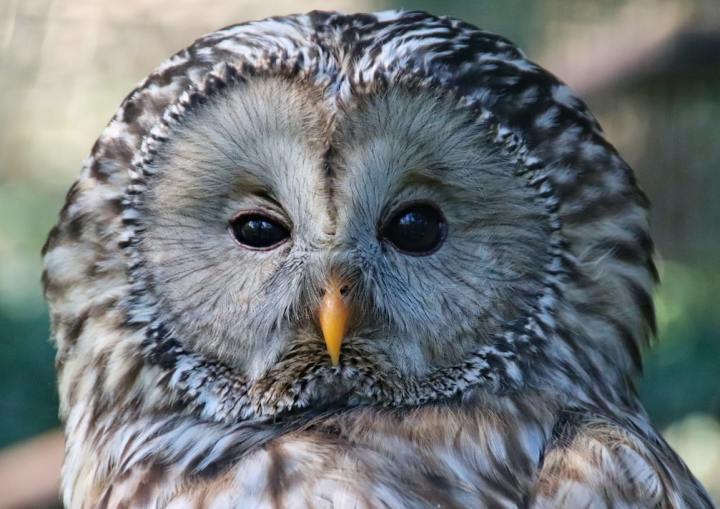 On our way home from Beppu we stopped off in the small onsen town of Yufuin. This town is often preferred by travellers when compared to its…less…polished neighbour (but I prefer the raffishness of Beppu). For me, Yufuin just seems a little… Duloc.

This doesn’t apply to all of Yufuin; the surrounding nature is breathtaking and outside of the tourist-focused areas are quite different. But, once you stumble onto the one main street of the town, everything seems a little artificial and posey.

The street was FULL of people juggling their outfit with their picturesque pancakes or Instagrammable ice cream, while desperately trying to squeeze in that essential Mt Yufu backdrop. I guess Yufuin brings out the hipster in all of us.

That said, with Yufuin’s focus on appearances and Japan’s love of everything ‘kawaii’ it made sense to me that Yufuin would have not only an owl attraction but also a Cheshire Cat Cafe and petting zoo all wrapped up nicely in Yufuin’s aesthetic epicentre, the Floral Village.

The village pays tribute to all things British. Designed like the Cotswolds, with cute shops selling vintage UK merchandise, an Alice in Wonderland-themed cat cafe and a Beatrix Potter store… it almost felt like home.

Well, except for the Swiss flags lining the rooves, the snowy Mt Yufu overlooking the village, Kiki’s Bakery,  the ‘Alpine Girl Heidi’ fountain and the good weather. The rather wacky combo of these three countries was confusing, but still enchanting. The powers of Japengliss?

Working to appease the anglophilic Harry-Potter-loving tourists, at the centre of this village sits an owl forest. I avoided this ‘forest’ during my last visit.

It’s my norm in Japan to avoid cat cafes, hedgehog cafes, crocodile onsens, aquariums etc. This is because I have a pretty clear idea that, while the animals are the main attraction, they are not the main priority of the people running them. Their presence often isn’t out of conservation, but for entertainment.

We paid 700 yen (just over £5) to go in. Before we did, we were instructed that some owls are ‘beginners’ and so if we see the beginners sign, not to touch them as they’re likely to bite. We were also taught how to stroke the birds, gently with the back of our hands.

Fully briefed, we went in. As we did I got the sense that we were in a mini-golf course. A synthetic microcosm of a magical forest- artificial leaves included.

It has to be said, the owls were beautiful. There were lots of different species and I was surprised at how big some of them were. They looked clean, well-groomed and… bored as hell. I guess the Harry Potter magic was to stun the birds, keeping them close to their perches. Petrificus totalus!

We soon came to a parrot, which another visitor was trying to train. He eventually succeeded and had the parrot greeting visitors in English and Mandarin.

Continuing that not-so-subtle Harry Potter theme, the forest had Hedwig and just like his time with the Dursley’s, Hedwig found himself trapped. He stared out from one of the larger enclosures looking pretty sorry for himself. Sitting next to this enclosure was a more troubling sight.

At first, I didn’t realise that there was an animal inside but sadly there was. Within a plastic sheet, within a metal mesh, within a cage, a bird sat cooking in direct sunlight. I’m not a bird expert, but that doesn’t seem the most comfortable environment? 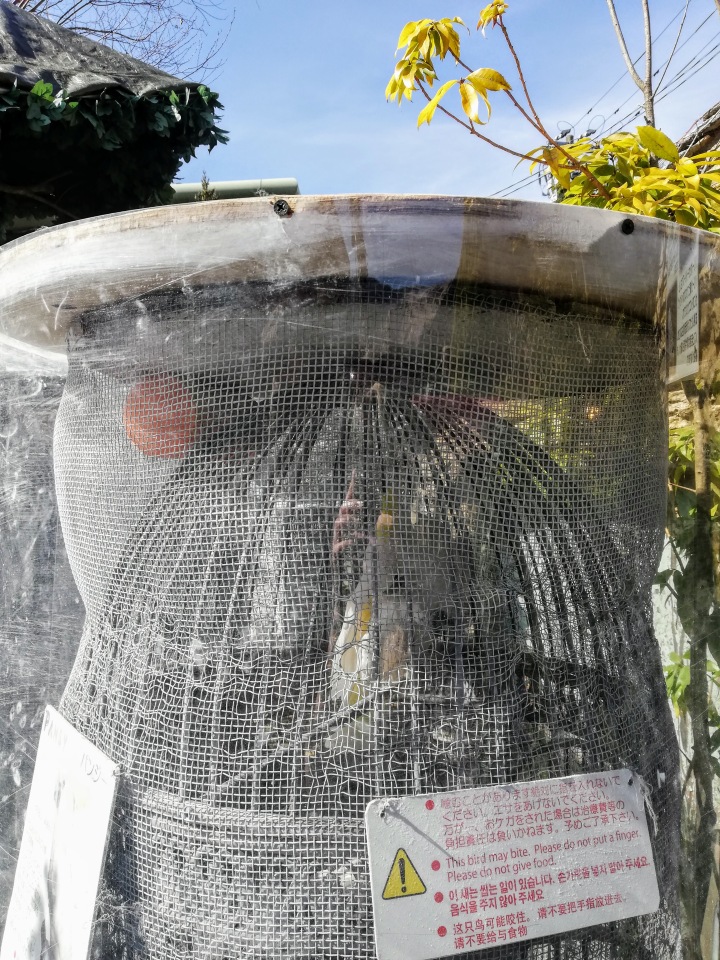 I said earlier that I usually avoid these places, so you might be thinking why even bother going if you don’t like them. Well, I guess there are three main reasons.

It was Ste’s first trip to Japan and it was important to me that he got to experience as much as he could. My second reason was curiosity. Maybe my prejudices had been wrong and these animals were treated like royalty? If that were the case, I’d be able to be around animals guilt-free!

My third and final reason was to avoid avoidance. It’s easy at times to try and ignore the uncomfortable things in life. We abject things that make us feel bad, which in turn makes us feel good, at least at first. I hadn’t felt uncomfortable about the treatment of animals for some time for that exact reason. I’d avoided it. After a while I noticed that I’d started to wonder about being veggie, thinking ‘it’s an EFFORT in Japan, there are animal products in everything‘.

Contrary to popular belief, veggies and vegans often aren’t photosynthetically-wired plant robots and there are times that we struggle with the lifestyle. For not the first, and I’m sure not the last, time I wondered ‘why did I do this to myself?’. This experience worked as a reminder.

The owl forest was what I’d expected and my feelings on those kinds of places haven’t changed. That said, the situation may be a little different in other countries. I know there are businesses like the UK’s Cat Cafe, which works to rehome cats and promote animal shelters. This is less of the case on Kyushu, and I’d argue it extends to wider Japan. 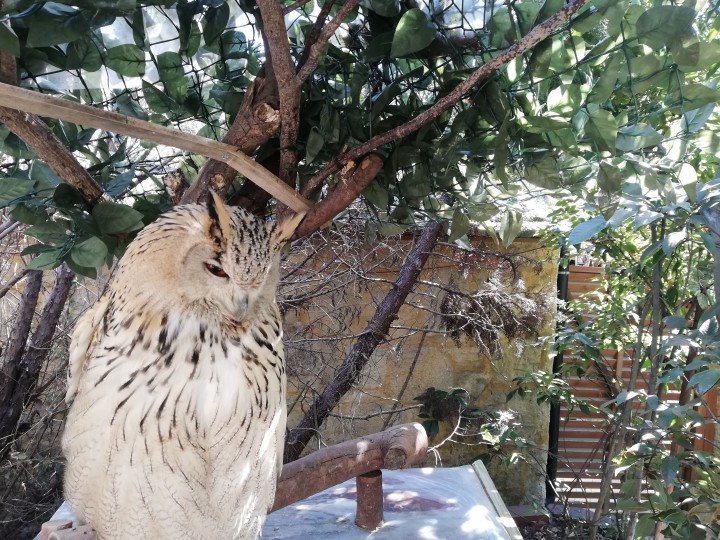 My Beppu trip unknowingly became a test of my empathy and ethics. I used this, and the other animal-centred experiences, to see what had changed since I decided to turn veggie seven years ago. If I didn’t feel comfortable in an aquarium or an owl forest… how could I feel comfortable eating meat?

For that reason I don’t regret visiting the animal attractions. They did make me upset but this worked to remind me why I chose to be veggie in the first place. In visiting these places I feel more grounded in my views. After visiting multiple institutions (with as open a mind as possible) my views haven’t changed.

For anyone who read my recent post, Japanese Monkey Mountain, Beppu, which do you think is most ethical- owl forest or monkey mountain?

It’s important here to note that not all veggies are veggies for ethical reasons and people who eat meat can still avoid these animal cafes/ forests. To anyone who doesn’t share these ideas, or not to the same extent, I’m not judging you. I haven’t written this post to judge anyone, I don’t have the right to do that.

My trip to the owl forest was a sad one. It inspired me to write this post which, in turn, may mean that just one person chooses a more ethical option. That’s the positive.

So while you’re in quarantine, making extensive daytrip plans for your future days of freedom, switch out an unethical cat cafe for an animal sanctuary. I’ll owe you one!

Studies and Sources on the Topic:

“The Moral Impermissibility of the Exotic Animal Café.”, Isabella Braga

“Conservationists Get Their Talons Out For Japan’s Owl Cafes”, The Guardian

For some more ethical animal options:

“Thoughts on the Rare Chance of an Owl Cafe in Japan”, Kristenabroad

2 thoughts on “Quite the Hoot? My Trip to Yufuin’s Owl Forest”