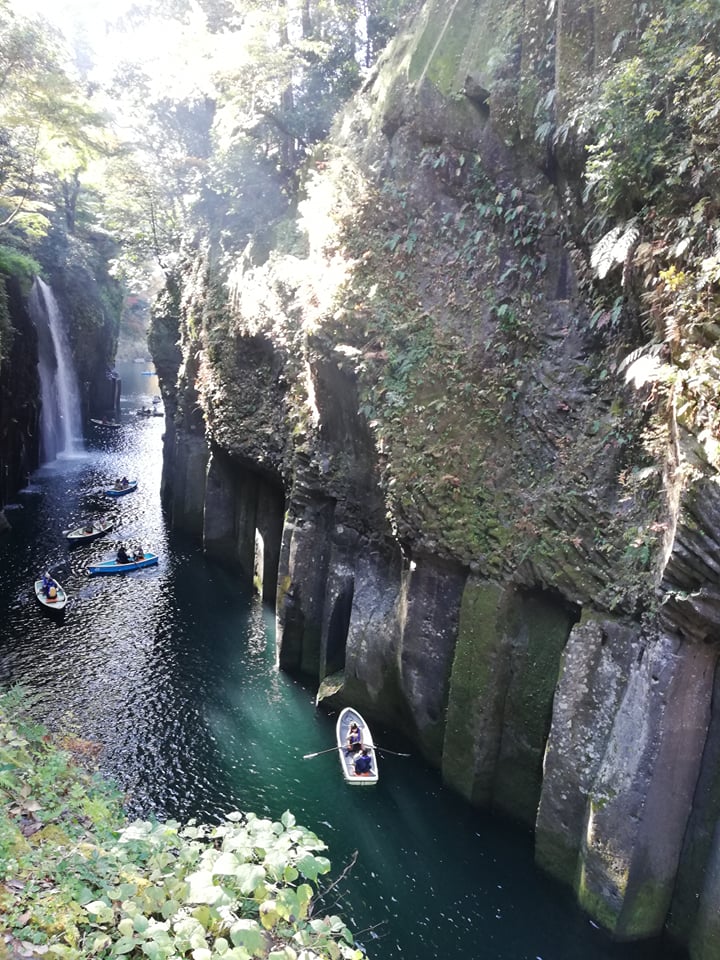 This weekend I took a solo road-trip across to Takachiho and my first destination, after an awesome stay at Ukigumo B&B, was the infamous Takachiho Gorge. 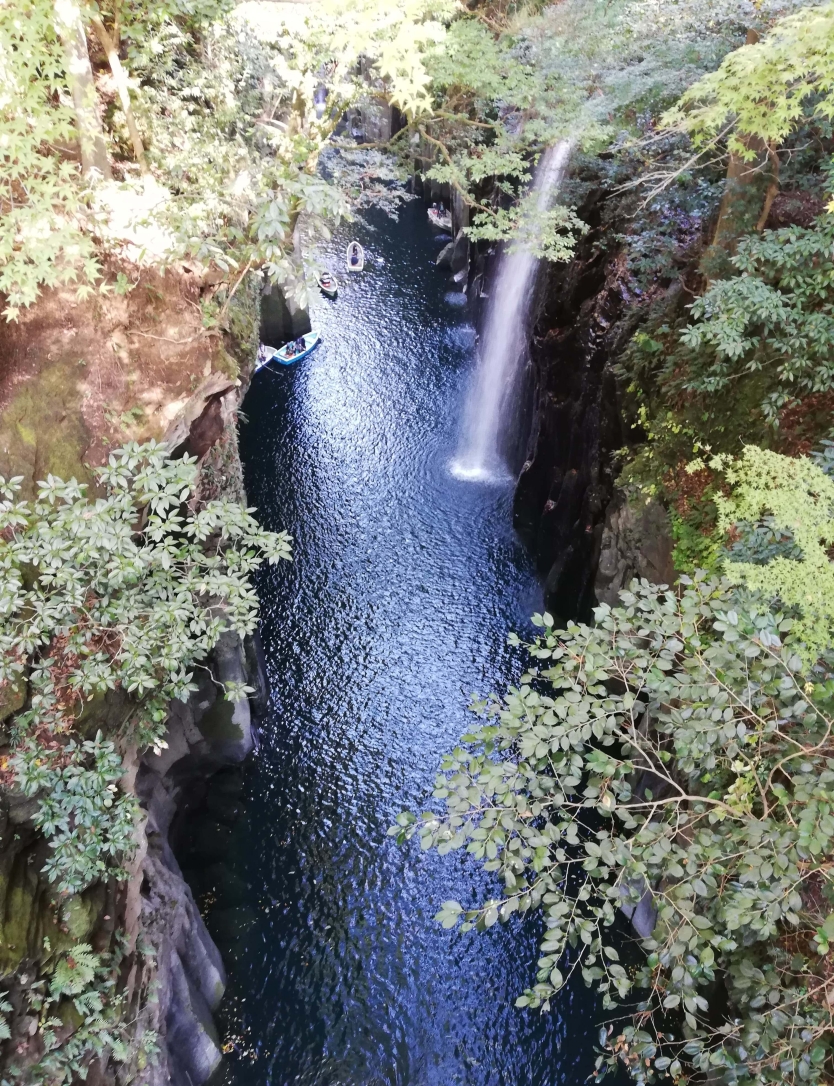 I wanted to visit here since I first arrived in Japan and researched possible road-trip destinations. It felt so great to finally visit!

That morning I woke up early, got ready and headed to the gorge not long after it opened.

I parked close to the rowing boat hire and it cost 500 yen, but if you’re staying in Takachiho, it’s not a far walk- 15 minutes from where I stayed. 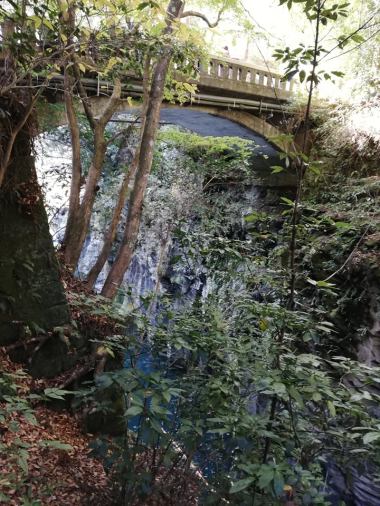 The first thing I wanted to do was get into a rowing boat and see the gorge at water level, so I bought a ticket (2000 yen) for a 30 minute ride and headed down. 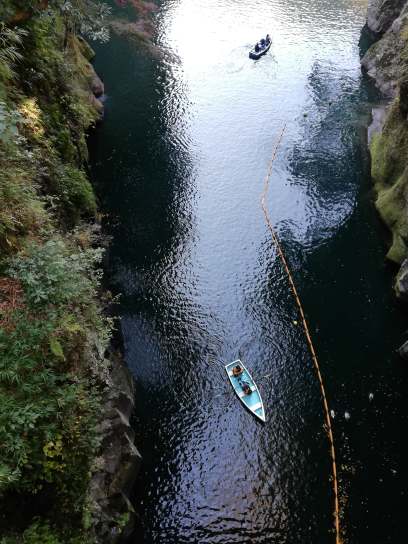 The cliffs were insanely steep and at 10am the sun was just creeping around the edge of the cliff wall and starting to burn away the mountain mist. 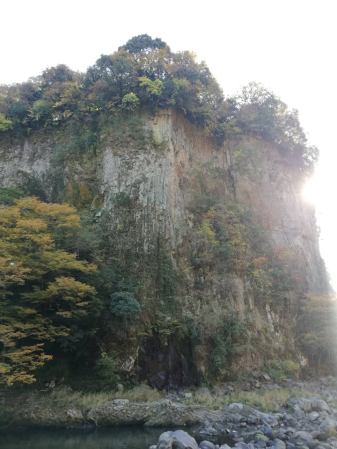 There was a short wait to get on the boats and then it was time. I had my little safety jacket on and hopped right into my little boat.

BE WARNED: Rowing boats are NOT as easy to work as they look in films! Take it from the girl who sat splashing water at the people sat waiting, for about 5 minutes trying to work out how to go forward.

Also, they’re pretty loud too, but you don’t really think about it when you’re in the swing of it.

One more thing, I should’ve guessed because of the whole ‘rower’ machine and ‘rowing’ as a sport, but it’s legit effort to move a rowing boat! My arms were stinging afterwards, but if you go with a friend or a partner, just give them the oars. You can take pictures of the sights and candids of them rowing, or zoom right into their face while they’re trying to get used to the controls (I vote the latter).

Despite the difficulties, I loved rowing in the gorge and if there were any opportunities to row again, I’d take it up in a heartbeat. Even at 10am there were a fair few people in boats and so there were a few clumsy collisions with us all trying to steer clear of the waterfalls.

Not long into the rowing, I nearly got splatted on the head by falling moss; about 3kg of it plunged into the water where I’d just been fumbling around with the oars. Divine intervention? Maybe, Takachiho is the land of the Gods.

If you were wandering, even though you probably weren’t, about how the gorge came to be. Fun Fact: it was formed a long time ago by an eruption of the Aso volcanoes, the ‘pyroclastic flow’ or stream of hot gases and lava, are responsible for the steep walls of the gorge. You can now sleep at night, your welcome. 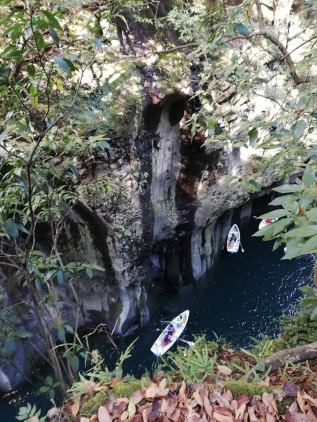 After I stopped slapping other boats with my oars and going backwards, I navigated my way back to land and had a walk around the gorge. I took the path leading to the ‘three bridges’ and it was a great, it felt so autumnal and the weather was perfect. 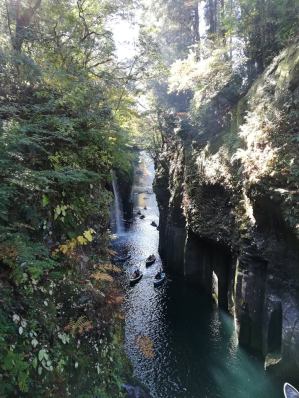 The leaves have started changing colour so there were lots of oranges, reds and yellows. 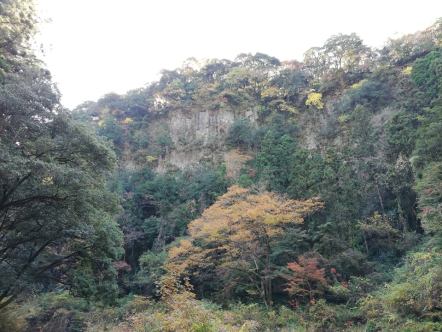 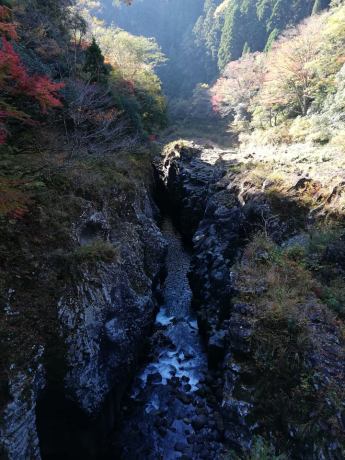 I even saw a Japanese Acer, the kind of tree that I bought for my mum before I heading to Japan (she loves plants with dark leaves and Autumn is her favourite season!) 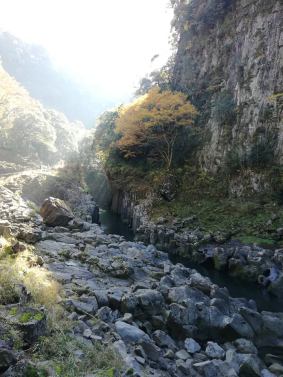 When I got back to the rest area, I bought some fish food and fed the koi carp, only to find that there were bigger, child-sized carp in the pond 5 minutes away!

Luckily I’d saved some fish food so got to feed the big dudes too.

While I was watching this colossal dark blue carp slug around the pond floor, 3 Japanese old ladies walked by and were looking for the fish. They couldn’t see them so I pointed out my chubby friend close to the wall and the ladies got so excited!

They stayed watching for a while so I decided to give them my fish food. One of the ladies gestured that we’ll share it so I stayed and we ended up chatting.

Despite my Japanese being ‘chotto’ and the lady speaking zero English, we managed pretty well!

She asked if I was American, classic, and then I explained where I was from and that I’m an English teacher from Kumamoto. She and the other gals were pretty impressed. I even got a lil ‘subarashii’ (great)… so… just sayin’.

After picking up a gift for my host family I headed back to the car- next location, Amanoiwato Shrine.

One thought on “Takachiho Gorge, Miyazaki”